Treating Termites – What Are My Options? 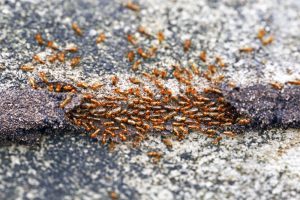 Termites are a prevalent threat to houses and, if left untreated or unmanaged, can cause catastrophic damage to your home. Homeowners – particularly those with timber houses or foundations – ought to be familiar with the many ways of treating termites and, just as importantly, how to recognise when termites are present. Failing to do so within an adequate timeframe can see your home suffering structural and often irreparable damage, capable of stripping up to a quarter of your home’s value and incurring thousands of dollars in costs associated with restoring the structural integrity of the house. Below is some important information relating to termites and how best to treat them and the devastation they can cause.

Where are termites found?

Before considering your options in termite treatment, it is important to understand the behaviour of termites and the variations thereof, as this will determine where they can be found. Being an insect, termites are inherently small and often quite difficult to distinguish. Australia has close to three hundred species of termites and fortunately, fewer than twenty of these are known to attack the types of timber used in construction. Be that as it may, the presence of any termites should be reported to pest control experts as a precautionary measure. Listed below are several features of a termite that might help you in identifying any of these ill-mannered invertebrates. These are arguably the most prevalent of termite species and as their name suggests they typically consume damp and often rotten timber on forest floors. Despite this, they might still be found in a more suburban setting – particularly where houses back on to nature reserves or any other such woodland. For houses that are perhaps a little worse for wear, these termites can be a significant issue. They favour timber that is already structurally compromised and as such, it will take them little time to damage any degraded timber beyond repair. These termites prefer to occupy the dead wood of trees and houses – mostly off the ground. In fact, scientists have found these termites to require little to no contact with the ground. Instead, they will survive solely off the dead timber in which they live and the limited moisture therein. Untreated dry-wood termites can be of catastrophic consequence to houses in which upper levels are supported by timber. Older Queenslander-style houses, as well as those with timber flooring are often victims and it is remarkable exactly how pervasive and well established these insects can become prior to detection. Underground termites, under the right conditions, can have an impact on the structural integrity of a house to an extent such that is may be rendered unsafe. They have been noted by experts as the most invasive and predominant of termites responsible for home damage and as a result, ought to be treated with considerable urgency. These insects require some soil contact to obtain their necessary moisture and they predominately colonise subterranean nests, favouring the dark and damp conditions. They are capable of rendering a house unsalvageable under the right circumstances and this is particularly so in relation to low-set homes with timber foundations.

Are any types of timber resistant to termite damage?

Termites are most widely regarded for their consumption of timber and the damage consequent thereof. It is a common misconception, however, that certain timbers are resistant to termite damage. Timber that is advertised as ‘termite-proof,’ is often little more than wood that has been chemically treated so as to render it indigestible to termites. Indigestible is not always synonymous with resistant and termites can inflict the same damage on timber of this nature, as they would on timber that is digestible to them. There are however, a number of treatments that can be successfully applied following the discovery of termites, although these treatments are best implemented by a pest control specialist. Additionally, termites have been known to cause considerable damage to building materials that offer them no sustenance whatsoever. There have been reports of substantial damage to plastic, rubber, mortar and even some metals that have been used in the construction of buildings. It follows that metal and mortar are much less susceptible to serious damage, however they should not be granted any less consideration – especially where either substance might already be degraded. Conversely, rubber and plastic do not have the durability of the former two materials and can easily be damaged beyond repair. Fortunately, they are seldom used structurally and can usually be replaced, although this is rarely without further damage.

What steps can be taken to mitigate the risks of termites?

The most important step to take in treating termites is to ensure that your house receives regular, professional pest inspections – experts recommend a minimum of an annual inspection. This will ensure that any invasive insects are detected before they are able to inflict any major damage. Should these inspections uncover termite activity at your house, there are numerous treatment options – some of which are listed below. These work exactly as their name would suggest – by repelling the insects from the structure. It is applied by means of a chemical spray, which is typically odourless and undetectable by humans. This makes it a popular method of termite management and it is particularly effective in most stages of termite infestation as it acts as somewhat of a shield. This is typically the first option to termite treatment and is sometimes done during the inspection stage. An attractant will first be applied to the relevant areas and, should it attract any termites, it will be replaced with a chemical toxin. This toxin will be spread into the colony by the termites as they discover it. This is an efficient manner in which to address the issue in its early and even progressing stages. The issues implicit in a termite infestation are multifarious and quite often, difficult to remedy. For this reason, it is imperative that you seek the guidance of a professional pest control specialist in both the detection and treatment stages. This can help you to recognise the issue and address it in a timely manner – ultimately preserving the value and structural integrity of your home.

Contact Bennetts Pest Control today and discover the best ways of treating termites in your home.

This entry was posted in General News, termites, Tips & Advice, Uncategorized by Admin. Bookmark the permalink.