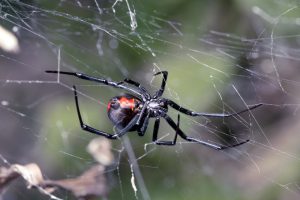 Redback spider plague in Queensland? Yes it is true, redback spiders are on the rise in Brisbane and surrounding areas, and this is why you need to know about them.

Where do redback spiders originate from?

Putting the redback plague in Queensland aside for a minute, you might want to know a little more about the little critters causing mayhem in Brisbane and beyond. The redback spider (Latrodectus hasseltii), known for its distinctive bright red stripe, is an arthropod species that has become one of Australia’s most famed venomous spiders. Redbacks are typically thought of as a spider that populates the country’s hot and dry land. Their original homes were in the south and southwest of Western Australia. That being said, redback spiders can be found all over the Australian continent, because they are great travellers and hardy beasts. From the humid north to the cooler south, redback spiders are common in all urban areas. These little, hardy and well-travelled critters have now scattered the globe. Redbacks have been found in areas of New Zealand. It is even said that redback spiders have populated Osaka, Japan (known there as the ‘Samurai redback’), thought to have arrived in cargoes of wood chips. The little blighters have even rocked up in a container that arrived in Lancashire, UK from Australia. It was once thought that the redback spider arrived in Australia after European settlement, being that they are so close in characteristic to the black widow spider. However, most experts now say the redback is considered to be an Australian native. Redback spiders originated in the country’s west, but soon travelled and populated other parts of Australia when the new settlers dispersed around the country.

Due to the large number of reported spider sightings reported in the current redback plague in Queensland, you will need to know what defines a redback spider. Redback spiders, are typically 1cm (female) and 3mm – 4mm (male). Did you know, that it is only the female redback spider’s bite that is venomous? Females are distinctive, with a black (or sometimes brownish) pea shaped body and eight black legs, and the world famous redback stripe across its abdomen. The redback is also seen as an hourglass shape, rather than a stripe. Male redbacks are less distinctive; they are light brown, with white markings on the abdomen, and smaller than their female companions.

How dangerous are red back spiders?

Redback spiders pack a mighty venomous punch, and cause a vast majority of serious bites in Australia. The spider’s venom acts on your nervous system, which results in the release and depletion of neurotransmitters. Yikes. That said, antivenin is widely available throughout Australia. You will be pleased to hear, no deaths have occurred since the introduction of redback spider antivenin in the 1950s. The problem lies in a situation where you’ve been bitten by a redback, in a remote location, away from medical attention. You really want to avoid these spiders in the current Queensland redback plague. Redback spider bites are frequent, and must be attended to. Early symptoms include pain, vomiting, sweating, muscle weakness and nausea. A redback spider bite left untreated, could result in a serious illness and sometimes death.

Where do red back spiders live?

With Queensland’s current redback plague, you need to be aware of where redback spiders like to live… under your dunny seat! Jokes aside, you should lift your toilet seat (particularly within outdoor toilets) to check for redback spiders. Redback spiders like to live close to the ground, in dry, sheltered and dark areas. Common places for redback to call home include under rocks, logs, sheds, garages, empty cans, bottles, or underneath outdoor furniture. Be careful when you are near such places – it is probably best not to check under every rock, just to see. Don’t put your hands where you can’t see them. Be careful when walking bare foot in your yard. It is probably best to keep your shoes on outside considering Queensland’s current redback plague.

What’s with the redback plague in Queensland?

It isn’t really a surprise to hear that Queensland is in the midst of a redback plague. Their food sources are insects; mosquitoes, flies, moths, cockroaches; all the critters typically found around your home. Warm weather, rainfall and humidity have attracted the ol’ redback’s favourite food, and as a result, they are thriving. Although it is early in 2015’s Queensland redback spider season, there has already been a surge in the number of bites and sightings.

How to get rid of red back spiders

If you think you can rid your homes of spiders amidst a Queensland redback plague, you can’t. Spiders do not live together, they populate vast areas. Young spiderlings travel over long distances by silk strands taken by the wind. If you kill off redback spiders you see, that’s not to say there won’t be others living around your property. You can kill off a number of redback spiders with insecticide sprays, but most domestic sprays will not totally eradicate all spiders. Your best bet is to call in the pest control professionals. Pest control technicians know what to look for, and will use the safest, quickest and most effective treatments on your property. A pest control specialist will treat your front yard, back yard and house exterior. Treatments won’t eradicate redback spiders from your yard forever, though, you’ll need to get your property re-treated down the track.